RumbleOn Reads The Brain Bucket The Mudslinger The Pit Stop

Stay up to date with all the latest news, events, announcements, and releases from RumbleOn.

8 Fun Facts About the Creation of the RumbleOn App

Fun facts about the creation of the best free motorcycle app

You’ve heard the news: RumbleOn has released a new app that’s going to change the way  buy, sell, and trade app work for motorcycles and other powersports vehicles. It’s a free motorcycle app, too, so there’s an extra cherry on top. And while we’re ecstatic about the new RumbleOn App release, we’d be lying if we didn’t admit the effort that went into building it. It was hard work, that’s for sure, and you might be a little surprised to know what goes into creating an app.

The short answer? A ton of things you might not have initially thought of. And with that, here are some fun facts involved in creating the new RumbleOn app!

Yeah, you read that right. Hey, we didn’t say we were proud of it, but it was a necessary evil during that time. That translates to about 1,500 gallons, to give you a better mental image of how much coffee that is. Just trust me, it was an excessive amount, and we wouldn’t have it any other way. I know there’s plenty of you coffee drinkers that can understand how important our caffeine fix was to make magic happen.

Sure, that seems like a lot of people, but when you’re taking on as big of a task as creating a buy, sell, and trade app, you always feel as those you can use an extra few people...or 20. About 60% of these workers were men, while 40% were women. Talk about an A+ team!

It might seem like half a year is a large chunk of time, but when you’re aiming for perfection, it suddenly doesn’t seem like that much time at all. The RumbleOn App was an idea that had been rolling around in the heads of the team for far longer than 6 months, but this is the amount of time involved in really crafting it. It was a giant, technical and creative arts and crafts project for adults!

About 140 new profanities were created

Creating an app is a heavily creative and technical process, and you’d be surprised to know the creativity involved in thinking outside the box to create new swear words. Because when things aren’t working as you planned, using the most basic profanities just won’t do. It doesn’t give you the satisfaction you’re looking for. And while I’m sure you’re curious about some of the words created, we’re going to try to keep this article PG-13 and refrain from going into details. But you can have faith that it was some pretty fun language.

Honestly, there was probably more than that. However, every single team meeting was necessary for the overall success of the app, and some pretty deep friendships were cultivated from those meetings alone. Because when you have to sit next to Bob every single day, for over an hour, you suddenly become very invested in the new food plan he’s put his dog on.

We had a great mix of age ranges, and that helped to provide us with a better understanding of what exactly this mobile app needed to achieve. I guess great things happen in your 30’s, huh?

Throwing all your effort into this big of a masterpiece is bound to make you hungry, and you’re going to need that food to push you into the wee hours of the morning. There were some mixing and matching (because deciding what you want to eat is a huge, life-altering decision) but these three styles of food were a crowd favorite with all. We’ve got some wings for our meat-atarians, Indian food for those demanding a little more spice in their life, and tacos for some added comfort during those late hours. And now I’m hungry.

1 moral mascot was recruited for cuddles 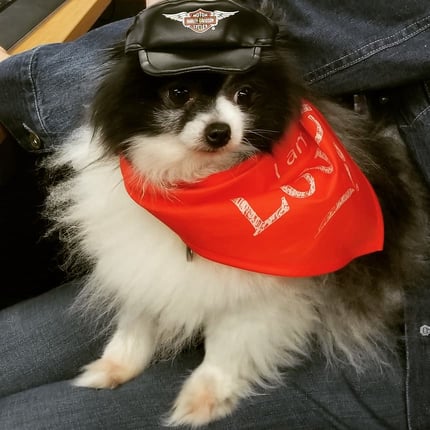 This app was not an easy task or mission. There were some moments that involved a little hair pulling, and when that urge seemed to overcome us, we had our Harley hound right there to calm us down. There’s a great therapeutic sense that comes with dog petting, and when that dog is also a Harley lover, you really can’t get much better than that. We’d like to give a great big “Good Boy” to the pupper that calmed us all down in times of frustration.

And there you have it, a list of things you never thought would go into the creation of a buy, sell, and trade app by RumbleOn. Some facts may appear random, but each fun fact contributed to the point we’re at right now. We now have created one of the only free motorcycle apps to exist that gives you access to sell motorcycles, buy motorcycles, and keep updated with our motorcycle blog. The RumbleOn app is here to change the industry, so why not take it for a spin?

We’ve developed all-new technology to make the process to buy, sell, trade, and finance vehicles a simple process. Meet the RumbleOn free motorcycle app: the king of buy, sell, and trade apps. Put the power in your pocket!

Trade in or sell a motorcycle the easy way, get your free cash offer.

Need fast cash? Want to trade for a new ride? Trade in or sell a vehicle for cash all online!

Written by Caitlin B.

It’s never been easier to sell any vehicle for cash online, and you can do it all from the comfort of your couch, guaranteed. Get your free cash offer in 15 minutes or less! GET MY CASH OFFER

Have your eye on a different type of ride? Trade in, trade up, and trade for any type of vehicle with RumbleOn. Use your cash offer as an online trade-in value. No dealership required. GET MY TRADE-IN VALUE